Synthetic Wheat in China Continues to Flourish Due to Grassy Species 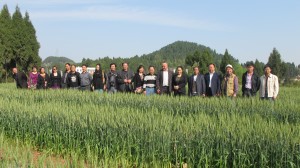 EL BATAN, Mexico (September 2,2014)- Wheat x grass crosses – known as “synthetic” wheats – were developed 25 years ago by a CIMMYT research team and have since been used in breeding programs worldwide. The first synthetic-derived variety to reach farms, Chuanmai 42, arrived in the Sichuan Basin of China in 2003 and allowed wheat farmers there to boost yields by as much as 20 percent – the most significant increase in the region for decades.

A new report, “Physiological Factors Underpinning Grain Yield Improvements of Synthetic Derived Wheat in South Western China”, was published in Crop Science and has shed light on the physiological differences that can give Chuanmai 42 and other synthetic derivatives better yields. “In our three-year study, the synthetic crosses were more vigorous in early growth stages and grew more above ground at flowering time than non-synthetic varieties,” said Garry Rosewarne, CIMMYT wheat scientist and corresponding author of the report. “At maturity, more dry matter was partitioned to grain in the synthetic varieties and the plants were more erect and compact.”

With support from WHEAT experts, farmers in northern India are sowi…